Home » Informations » Editorial in Honor of John B. Goodenough

The latest issue of the journal “Molecules”, published on November 1, honors John B. Goodenough. The editorial entitled “In Honor of John Bannister Goodenough, an Outstanding Visionary” signed by Jean Etourneau (Emeritus Professor at the University of Bordeaux – ICMCB), Claude Delmas (Emeritus Research Director – ICMCB), Stéphane Jobic and Myung-Hwan Whangbo, the 4 “guest editors”, is followed by 15 articles, several of which were written by members of the ICMCB.
> See the special issue

The global scientific community in Solid State Chemistry has been waiting for a very long time for John B. 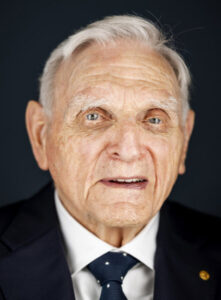 Goodenough to be awarded the Nobel Prize in Chemistry in 2019 for his work on Lithium-ion batteries which are revolutionizing our daily lives today. In addition to this aspect, John Goodenough created a global “School of Thought” early on in which he demystified Solid State Physics in the eyes of chemists through concepts and qualitative approaches that still inspire materials researchers; and to give one example among many, the Goodenough-Kanamori rules in magnetism from 1950. In summary, John Goodenough could have won the Nobel Prize twice for having created concepts that have been used for decades by chemical researchers du Solide worldwide and of course for his work which led to the development of Lithium-ion batteries!
Jean Etourneau